Italy continues to show resilience, versatility and creativity, while notably rediscovering itself. A renewed ability to get involved with a propensity for modernisation and technological support. Italy is perceived as a safe and welcoming place by Italians.

According to estimates by the Italian Government Tourist Board (ENIT), 85% felt protected by territorial measures and those adopted in accommodation facilities alike. We are aware of the difficulties that companies in the sector are experiencing, particularly in some cities and areas of the country, but COVID can paradoxically turn into an opportunity to review and enhance tourist attractions. Consider the way technological and social support is allowing tourist services to make huge improvements, as already experienced in the difficult months of closures.

This is the case for the Uffizi and the creative initiatives of some cities that have chosen to reduce the space for cars in pedestrians’ interests by revising the urban fabric and introducing new models for accessing culture.

Severing connections has brought about profound changes in the eyes of travellers who now have a greater need for reassurance, while also searching for meaning which was lost in the boom years. Travellers are emerging for whom tourism is an essential part of life and who will choose more and more valuable experiences.

For this type of traveller, Italy is undeniably a top-of-mind destination.

Trends already underway before the pandemic have accelerated, such as slow tourism, active and sports tourism, multi-generation travel with family and friends but also exclusive travel. It should also be emphasised that the global economic crisis, by which the coming years will be marked, will have an impact on the spending capacity of travel and will make the spending divide even more evident, with a much faster recovery than luxury tourism.

Finally, we cannot but highlight how new ways of working will affect business travel, with a possible impact on the growth of bleisure, i.e. the combination of business travel and holiday experience.

Our flexible strategy immediately stood out in the light of new requirements by distinguishing between countries in Europe and long-haul ones.

Italy is the undisputed leader in long-haul tourism: a quarter of tourists from outside Europe come to Italy and therefore the country is particularly affected by the flight ban from long-haul countries. Here, ENIT is trying to strengthen Italy’s position with a brand maintenance operation through promotional activities. It is an invitation to be consistent and coordinated. The challenge for local governments and communities will be to stabilise forms of collaborative services, also by making them more accessible to those who are usually less attentive to the debate on collaboration between local authorities and citizens.

Cities linked only to international tourism will have to focus on increasing domestic tourists’ loyal in order to accelerate rapid recovery prospects until 2022. Digital technologies have also become an incentive to increase users’ interest in new, hitherto little explored forms of cultural experience, such as virtual guided tours of museums, reading, theatre performances and online concerts. These are interesting models, but are rarely able to create sufficient economic value.

So, we welcome campaigns which actively involve celebrities but also citizens with their stories and social storytelling.

Cultural tourism must also become “popular” and create a network which establishes a circuit involving a range of museum hubs. These could include single tickets, with all-inclusive offers that include multiple sites and generate multi-segment links so as to liven up cultural hubs with interactive visits that convey the cultural message in the current context. Cultural tourism must be recalibrated by intertwining it with sensory paths and innovation, with special openings in time slots for all age groups and perhaps with investments in merchandising that create a sense of belonging. 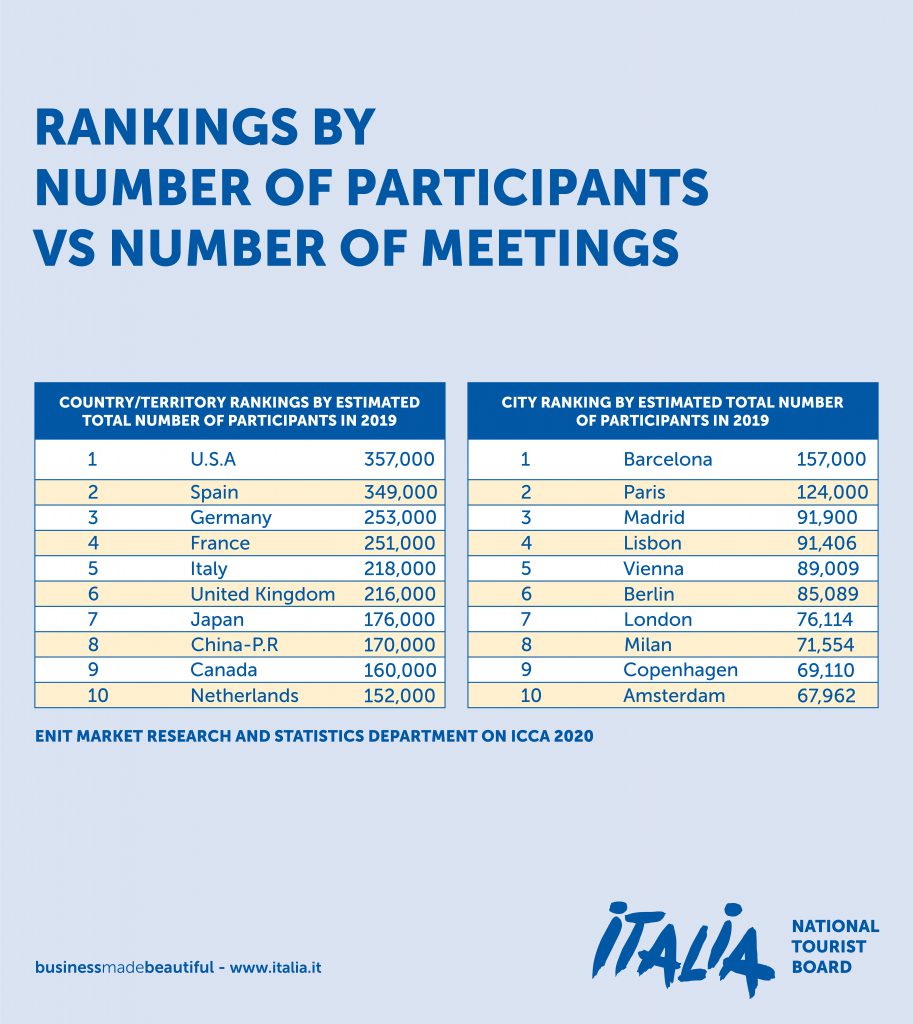 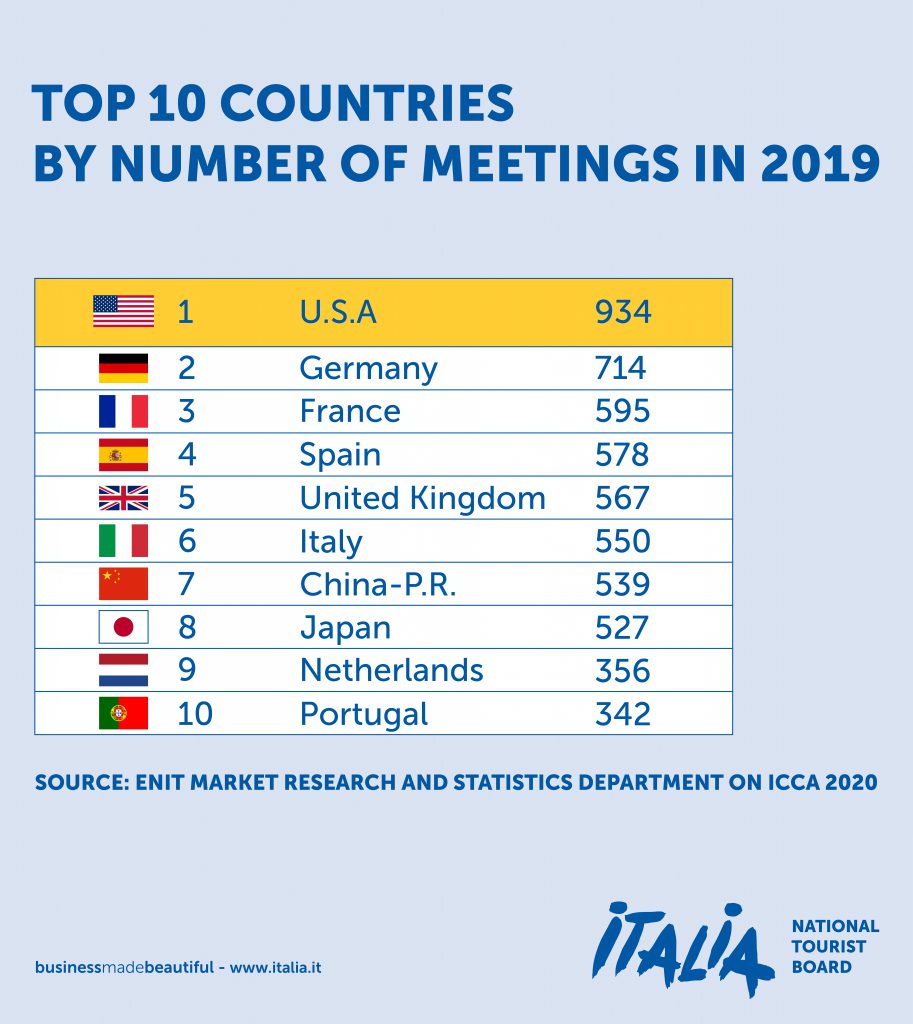 Medical science (17%), technology (15%) and science (13%) are the three most popular topics of international meetings.

In order to face this period of uncertainty, ENIT has launched several workshops in many countries to boost the promotion of MICE, luxury, leisure and active tourism (UK, Australia, 1 generic workshop for Europe, 2 in Poland and 2 in China). For subsequent events, ENIT targeted specific segments and markets, including MICE and weddings in November.

In Europe, where the largest number of consolidated countries is concentrated in terms of tourist flows to Italy, ENIT has concentrated its promotional activities in individual markets, focusing on growth in value and sustainability, innovation and seasonal adjustment as primary objectives. 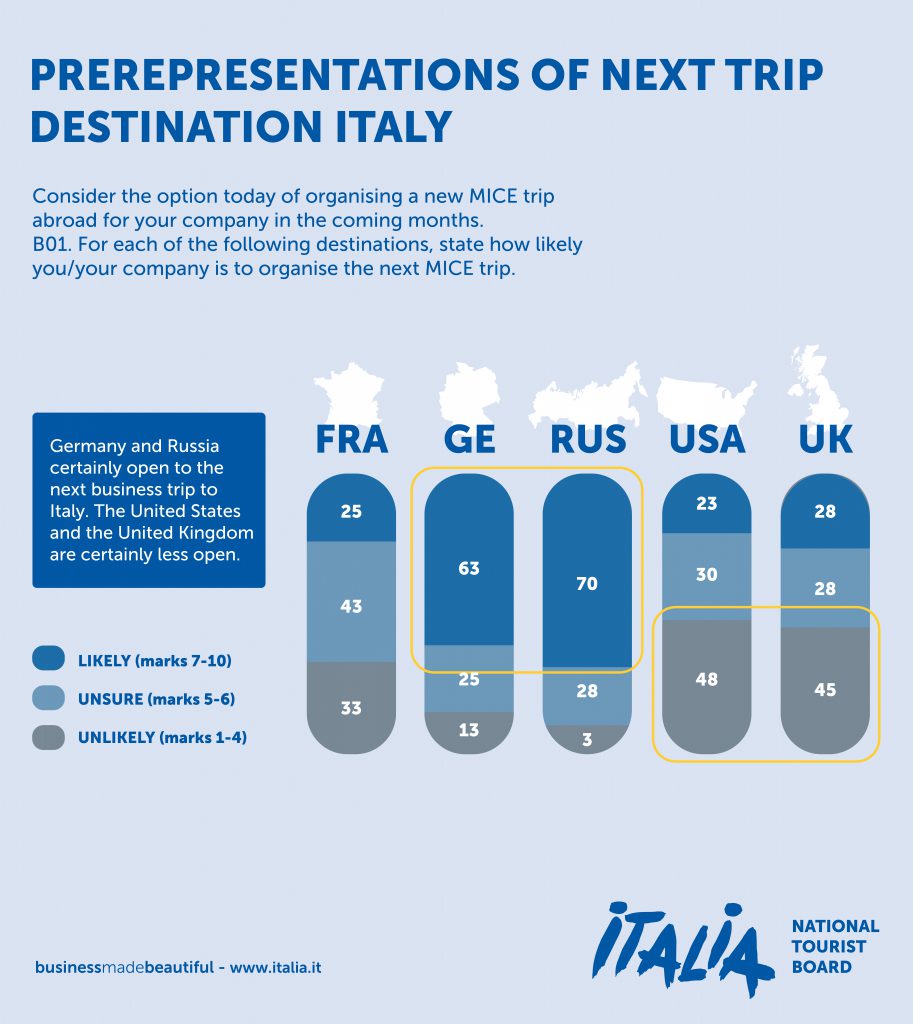 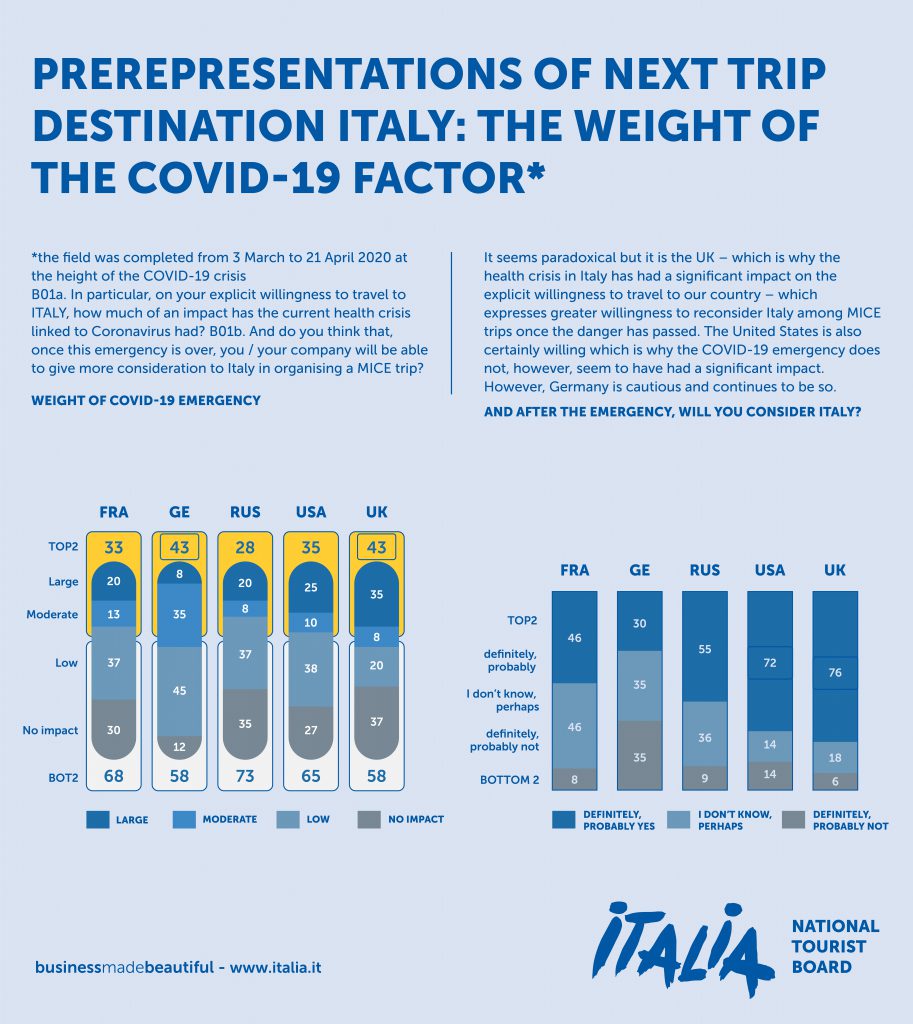 Congress tourism is a rapidly expanding and crucial sector for Italy. For three years now ENIT has been re-investing, committing 70 per cent to leisure and 30 per cent to the promotion abroad of Italy in MICE. A driving sector: in 2019, average total spending per meeting was nearly $11 billion, excluding spin-off investments and economic development.